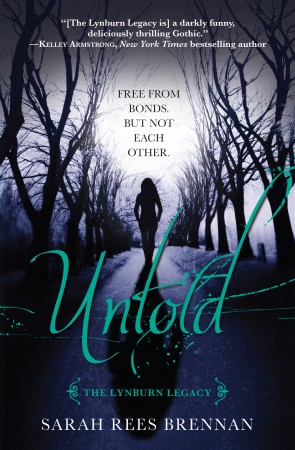 It’s been here for like a month, actually, but I didn’t write a review then because… well… I don’t have any great excuses. But! Now that Mark (yes, as in Mark Does Stuff) is reading Untold, I figured I had a golden opportunity to put this out late and not have it be completely irrelevant!

This is a SPOILER-FREE review, y’all.

It’s time to choose sides… On the surface, Sorry-in-the-Vale is a sleepy English town. But Kami Glass knows the truth. Sorry-in-the-Vale is full of magic. In the old days, the Lynburn family ruled with fear, terrifying the people into submission in order to kill for blood and power. Now the Lynburns are back, and Rob Lynburn is gathering sorcerers so that the town can return to the old ways.

But Rob and his followers aren’t the only sorcerers in town. A decision must be made: pay the blood sacrifice, or fight. For Kami, this means more than just choosing between good and evil. With her link to Jared Lynburn severed, she’s now free to love anyone she chooses. But who should that be?

I should know by now that every single book Sarah releases is somehow even better than the last, but, as always, I was in no way prepared for Untold.

The new overarching theme (or topic, if my English teacher is reading this) of Untold is made pretty clear within the first couple of pages: loneliness. It’s not an uncommon theme, granted, but the way Sarah examines it and utilizes it is pretty incredible. There’s a huge amount of thought put into what it means to be lonely vs. what it means to be alone, and the way each character goes through both of these experiences in a different way is a classic example of the emotional depth of this novel. Most of the ideas focused on in Unspoken are present in Untold as well, but Sarah never runs out of new things to say about them. She shows us layers and layers behind each basic concept.

Plot-wise, the high stakes that manage to keep being raised are, frankly, unbelievable, and a huge asset to the story. There is no sitting around, waiting for the action to begin. There are no contrived plot twists to somehow bring the characters back to where they were in the first novel, to give them a rest, or to allow for a less frenzied beginning. Untold takes place two weeks after the end of Unspoken. The progression of the story, though it does have a clear beginning and a clear ending, does not feel governed by any sort of plot formula.

The characters, of course, are the most engaging part of Untold. What I’ve always loved about Sarah’s novels is the incredible consistency of her characterization. No character ever learns the same lesson twice, or appears to have forgotten the repercussions of their previous actions; everything that happens to these characters changes them and their course for the novel. It’s character-driven fiction at its finest. The emotional stakes of Untold are high, as well, and remain engaging, because Sarah puts such an emphasis on validating her characters’ emotions. There is no ceiling or floor placed on Kami’s trauma, Ash’s self-hatred, Jared’s anger, Holly’s insecurity, or Angela’s general distaste for humankind, and the lack of emotion policing allows Sarah’s characters to truly touch us and impact us, because human reactions are not governed by rules or limitations, they just are.

It’s that time of year again. No, I’m not referring to the time of year when you dress up in strange costumes and either scare or offend your entire neighborhood. I’m talking about November, National Novel Writing Month, the month during which hundreds of thousands of people stash obscene amounts of caffeine products in their house and develop insomnia in order to produce 50,000 words of prose.

Now, full disclosure: I have never completed a novel during NaNoWriMo. I’ve hit the 50k word limit by putting every story I’d attempted that month into a word document, but I’ve never genuinely written a novel for NaNo. I tend to burn out before the month has even started, spending weeks and months plotting in anticipation, and then reaching November, only to realize that I’ve plotted away any room for impulsiveness or creativity.

Still, countless people swear by NaNoWriMo as the single best motivational force in their lives. And every year, without fail, the NaNo hype eventually finds its way to me. This year, though, I’m not doing NaNo. I’m not even attempting it. I know that, with university applications and a self-publishing project on my plate, not doing NaNoWriMo is the best thing for me. But oh, am I ever bummed about it.

The thing about NaNo is that, regardless of whether you actually complete a manuscript (let alone a single chapter), it’s an event that brings writers together. Forums, write-ins, meetups, word wars, critique partners, and any form of support are the most essential part of a writing career. I know how much I depend on those elements.

So, here’s my verdict: is NaNoWriMo the best method of writing a novel? Maybe for some people. Is NaNoWriMo a unique and effective experience? Yes. Oh, yes.